As promised, I shall now update you properly on what I’ve been up to the past week. Went to get Jesebel from Pudu on Thursday night then headed to a friend’s place. Played Guitar Heroes, you know, with the actual guitar and all. That kept us up til’ about 6 in the morning. Then we tried to squeeze in enough sleep, knowing that we had to be up by 11 to get to KL Sentral for the bus to Genting. We made it. On time (: 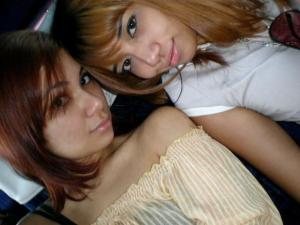 We were told to have make up on for the Xpax thing that we were going for. So thats what we did. Looked our best. We got to Genting at about 2pm, and had to wait around for 5 hours so that some people could do our hair and make up. Very NOT appreciated at all, because THIS is what they did to us.

A close up on the damage they did.
Who in hell would ever match the outfit we had on, with this kind of hair do and make up?! And to make it worse, the make up they used had NO brand, therefore leaving me with an outbreak of pimples the next day! Curse them.
And guess what? We didnt even get through the whole night. Halfway through the 8 hours of work we had that night, we quit. Not only did they ugly’fy us, they forced us to stand in one spot, where there were clearly very few people passing, and we werent even able to stand in pairs. We had to stand at opposite sides of the stairs. AND, they placed 4 girls within a 10meter radius of each other. Not to smart now, IS IT?! Plus, by the time it got to 12, we were already freezing our asses off. Some girls got jackets, but they just couldnt give it out evenly. Curse them again!

So after quitting and returning our clothes, we considered waiting til 8 then taking a bus back to KL, but to our luck, we found out that we would not be able to get a bus until 12 the next night. So we just decided to crash in a hotel room instead. We needed the place to wash all that hairspray out of our hair anyways.

I experimented first. Hence the towel around my neck.
Finished quite a few bottles of shampoo on our hair. Then stayed in the room til the next morning. Decided to go out for lunch the next day because, well, we were starving.

Us, out in the cold.
If you look closely to the right side of the picture, you would spot the ING in the famous GENTING sign that people usually take pictures with. But we were just too lazy to walk around to the other side. And really very cold. Plus, you can see the sign anyways, so, good enough la.

We wondered around a little then got back to the hotel room. After which we realised we were actually too tired to make the trip back to KL then back to Penang. So we just decided to extend our stay for another night and celebrate Jes’s birthday there itself. Called a few friends that were free to join us. Hugs for Brian who drove himself and Amrish up to Genting all the way from Shah Alam. The poor fella had work at 8 the next morning.

I tried….
But we still couldnt get a clear group shot with the candle effect. 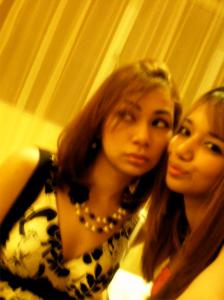 I think this picture looks a little mirrored.
Went for a quick dinner, during which Jes mentioned that maybe we should go to Safari. And just because she was the birthday girl, we did (:

Us with Brian, and his friend that got us in, FOC.

I know I look a lil weird in this pic, but I still like it. 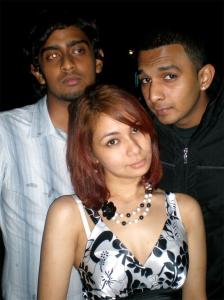 I dont need to be told how short I am. I already know.

With some guys from Canada and Hong Kong who wanted to take pictures with us.
I’m sure you know which is which.

Got back and fell asleep almost immediately. Coz we were all so tired. Especially Jes and I, coz of the obvious lack of sleep. Then went for her birthday lunch at Kenny’s, and quickly went to catch a bus back. 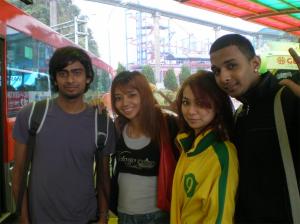 The goodbye shot.
After leaving Genting, Jes and I came back to Penang immediately for her planned birthday celebration, which actually had to be postponed because of Genting. Been here ever since, but that’s another story, for another time. I just got back home, and I desperately need to get some proper rest. There seems to be a pattern to my insomnia. Everytime I’m around Jes, my sleeping time apparently fails to exist. Lol.